Are you ready for the 2017 StarCraft II Copa América?

StarCraft II Copa América is the longest-running official StarCraft event in our region. Since 2013, thousands of players face off every year, vying for the crown and the title of best StarCraft II player in the region. At the end of 2016, the terran armies, zerg swarm and protoss forces paid their respects to Brazilian commander Diego "Kelazhur" Schwimer, crowned as the best player in our region after an exciting year of competitions in the Copa América, the most important battle this side of the globe. For the first time, Juan "MajOr" Tena, the previous sovereign in all previous seasons, was dethroned.

In 2017, the most iconic tournament in Latin America returns fully recharged and filled with new stuff and important changes. You can't miss this chance of competing and becoming the next great champion. Yes, #SC2CopaAmerica is back with a prize pool of USD 40,000 to be split during 4 seasons throughout the year, plus one of the most important changes of all time in our competition – both finalists in each season will be awarded an open spot directly in the WCS global circuit! 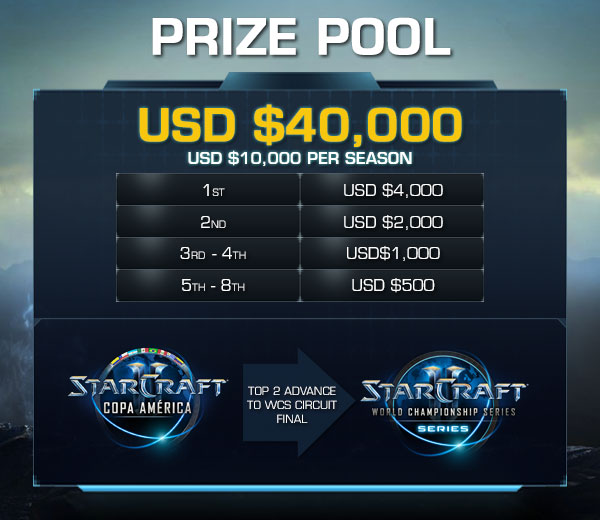 WHAT WILL BE THE FORMAT USED IN #SC2COPAAMERICA?

We'll keep the tried and true format for Copa América: each season will have four Open Qualifier Rounds for all players in Latin America, to be played in direct-elimination "best-of-three" maps, and the four best players will move to the season's Group Stage.

The 16 players that qualify for the Group Stage will be divided in 4 groups with 4 players each (double-elimination in "best-of-three" maps), and the 2 first players in each group will earn a spot in the Season Finals. Lastly, the 8 players in the Season Finals will fight ruthlessly in a final direct-elimination bracket with "best-of-five" maps ("best-of-seven" in the Grand Finals), which will award USD 10.000, plus 2 direct spots for the WCS Global Circuit in each season for the 2 finalists, along with the honor of being crowned as the great champion of Copa América.

WHEN DOES THE 1st SEASON OF #SC2COPAAMERICA BEGIN?

The 1st season of the 2017 StarCraft II Copa América starts on March 9th, when the battles of the 1st open qualifier rounds of the year start. Don't miss out this exciting fightand experience all the action of the #SC2CopaAmerica!

* The links for applying to the qualifiers will be made public next week.

If you want to follow all the details about the most important StarCraft II tournament in our region, we recommend you keep an eye on the Blizzard eSports Brasil Facebook and Twitter networks, and don't forget to tune ine our official broadcast from the Group Stage onwards, via TwitchTV's Copa América channel.

For the time being, prepare your troops and share with us your forecasts and opinions using #SC2CopaAmerica! Let's do battle!