Finalists of Season 3 of # SC2CopaAmerica

With the blood boiling after a vibrant second season, a new America's Cup stop is already underway and competitors have come to the call to fight for the glory of being the champion. Join us to review the details of the recent group stage.

Fighting for the crown

The big favorite of group A was last season's champion, Diego "Kelazhur" Schwimer. The Brazilian player met expectations after dominating widely to rivals and quietly qualify for the playoffs. On the other hand, the second place was fiercely disputed between the Peruvian Max "Smile" of the Source and the Bolivian Bruno "DarK" Barrios, who animated an intense series where the representative of Peru was victorious.

Group B had the second runner up of second season, Mexican player Juan Carlos "SpeCial" Tena. The terran made its way among the challengers claiming the first position of the group despite the tough opposition Colombian Sebastian "eGGz" Latorre. The latter tried to secure his classification in the group's last duel, but Ricardo "Maker" Flores had other plans and snatched that place.

The great surprise of this season was player Eduard "Ryu" Condori in group C. The Peruvian managed to classify first after beating two great players like Rodrigo "Jarppi" Hinojosa and Julio "BLord" Sotomayor. With only one place to play and three big players to the expectation, the series showed the best of each competitor's arsenal and in the end it was the Mexican player Pablo "Cham" Blanco who showed his consistency and stayed with the pass to the next stage .

Chilean Felipe Felipe "HalfBreed" Zuñiga conquered the last group of this phase, affirming once again that its presence in the regional scene remains latent, shortening the distance with the titans of the present tournament to tournament. The second place of the group was played between representatives of Brazil and Gabriel "ScaM" De Moura (French-Portuguese with residence in Brazil) won by beating Erik "Erik" Braga and Vitor "Dakkon" Ferreira, two of the best players in the group. Country green-yellow. 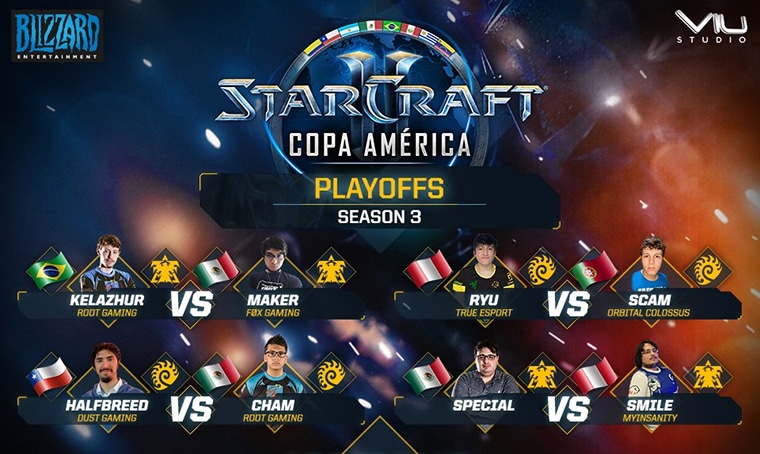