Battle in HGC Copa América 2017 and be part of the global Heroes of the Storm circuit!

The Latin America battleground is opening its gates and the heroic abilities are charged for the long awaited return of the Copa América de Heroes of the Storm, the tournament that gathers the most important players of our region, trying to become the best and compete in a global level, in the Heroes Global Circuit. Last year, the Brazilians of Burning Rage carried the responsability. This time, it might be you!

The HGC Copa América 2017 will split the Latin America players in two subregions, North and South, separated in the following manner: The best team in each competitive instance will have the honor of representing Latin America in the global stop of the HGC.

The Opening and Closing seasons, and the 2 Preseasons will be divided in 5 phases:

Each competitive instance will start with an Open Tournaments phase, generated by the Community, so that every player has the opportunity to create their own team and compete constantly. The communities and organizers who wish to organize a tournament must apply according to these instructions and, after receiving the official Blizzard validation, they will also receive a kit with digital prizes to be used in their tournament. However, the best of all is that the winning teams in an Open Tournament will be part of a decisive bracket that will award 4 direct spots (2 per subregion) to the Group Stage of the Copa América. Organize an Open Tournament right now and be part of the Copa América!

After the Open Tournaments phase, each subregion will have 3 official qualifiers using the double elimination format to define the 6 teams (2 per qualifier) that will advance to the subregional Group Stage, where they will be reunited with two teams that qualified through the Open Tournaments.

Each region will have a Group Stage with 8 teams. The teams will be split in groups of 4 and will compete in a double-elimination format to decide the 4 teams in each subregion that will advance to the subregion finals.

The best 4 teams in each subregion will fight in a direct elimination bracket to pick the teams qualified for the Regional Finals. The champion team on the North will advance alone and the 3 best teams in the South shall advance together.

The best 4 teams (1 from the North, 3 from the South) shall fight in a double elimination bracket to choose the champion of the competitive instance. The Regional Finals of each Preseason will be held online and will qualify the champion team to the respective Global Clash of the HGC. On the other hand, the Opening and Closing Finals will be held live and will award a spot on the Global Brawl of the corresponding HGC.

During 2017, the Copa América de Heroes of the Storm will award $80,000.00, with teams fighting in each competitive instance for a prize of $20,000.00 and for a direct spot on the respective Global Clashes or Brawls in the Heroes Global Circuit! 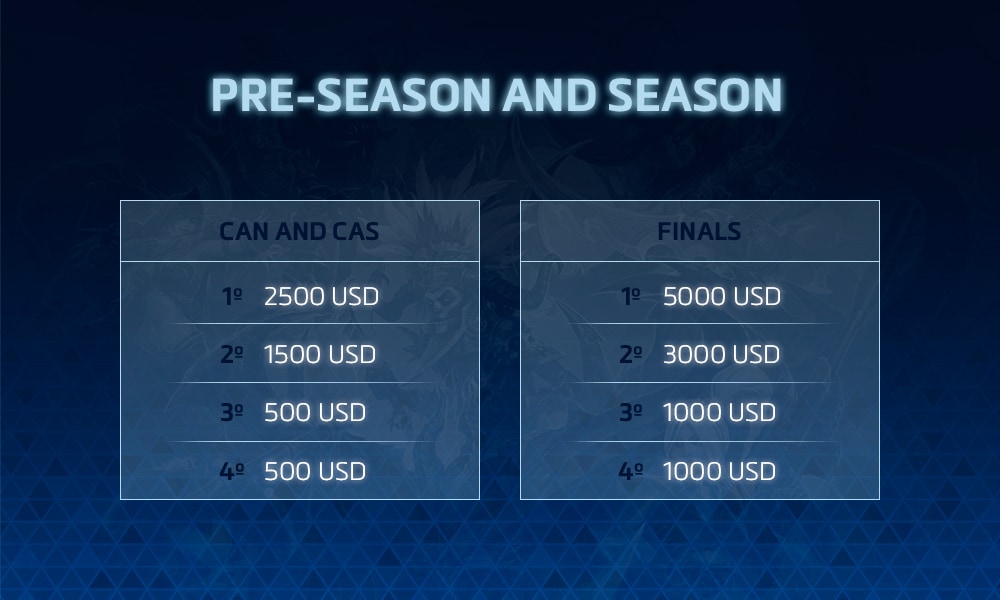 WHEN DOES THE 2017 COPA AMÉRICA START?

The Opening Preseason of the Copa América de Heroes of the Storm starts with an Open Tournaments season from January 3rd to January 18th, where you can compete to qualify in the community tournaments approved by Blizzard. These tournaments will be advertised constantly in our e-Sports social media, on Facebook and Twitter. So, stay tuned!

If you can't qualify through the Open Tournaments, don't lose your hopes because there's still a possibility to obtain a spot through the Official Qualifiers:

*The links for registration will be published in our e-Sports social media next week.

If you want to support your favorite team during the Copa América, we invite you to watch the Group Stages, Subregional Finals, and Regional Finals with the comments of the best shoutcasters in Brazil in our official channels of the Copa América on TwitchTV. Also, you can follow the trajectory of new teams with the broadcast of each Open Tournament announced in our e-Sports social media.

So, now you know! Prepare your teams, hone your strategies and share with us using the hashtag #HeroesCopaAmerica throughout the year, because the brawl wits for you!