Everything you need to know about Hearthstone Copa America!

A revolutionary competitive year for Hearthstone has arrived and Latin America will be the focus of all the attention around the world thanks to the kick-off of Copa America 2018 as the first Hearthstone Championship Tour (HCT) Stop of the year.

The iconic tournament from Latin America invites you to join the adventure, prepare to fight for the precious HCT points and the honor of becoming the new heroic Champion of Copa. 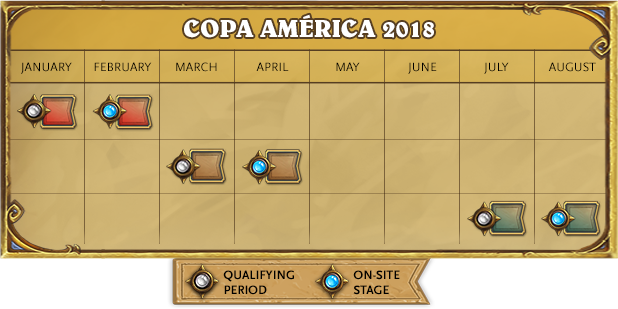 Hearthstone Copa America will be divided in 3 seasons: Summer, Fall and Winter. Each one of the seasons will be linked to HCT official seasons, being vital components of 2018 Tour Stop circuit. Don’t miss your chance and mark your calendar!

Copa America will be a key battleground inside the Tour Stop circuit granting more than 190 HCT points per season, along with the honor of becoming a new Copa legend.

To secure a spot in the on-site portion of a Copa América Season, players will need to conquer the “Open Qualifiers” and “Qualifying Duels” stages first. Every season will have 4 Open Qualifiers (not broadcasted):

The Top 8 players from each qualifier (32 in total) will advance to the “Qualifying Duels” stage, where they will be distributed in a double-elimination bracket to define the Top 16 that will travel to Sao Paulo, Brazil, for the on-site stage of Copa América.

16 qualified players will play face to face in Sao Paulo (Brazil), where they will be divided in 4 groups of 4 players each. Each group will play in a Dual Tournament bracket to define the 8 legendary players that will advance (2 per group) to the Season Finals.

With the best 8 players defined, they will be distributed in a single elimination bracket that will raise the tension and expectations to the maximum level while competing for the trophy and the honor of becoming the Champion of Copa America.

All the series will be played as a Best-of-five conquest mode (4 decks and 1 ban). For more details don’t hesitate to check the Official Ruleset for Copa America 2018 (Available soon)

All the qualifiers for the Autumn Season are close, don’t miss it!

All the details from the most important Hearthstone tournament of the Latin American region can be found in our official Copa America site and our Twitch channels, where you can find news, interviews, results and off course all the live broadcasts starting on the “Qualification Duels”.

Join our Community and participate with us on the legendary new year, sharing your comments on Twitch and in Social Media using our hashtag #HSCopaAmerica. See you at the tavern!

Who can participate in Hearthstone Copa América?

Copa America will open its doors to all players through 3 kinds of open qualifiers:

In which server will Copa America be played?

All players that want to participate in Copa America will must play all of their matches in the Hearthstone Americas Server.

What is going to be format for all matches in Copa America?

All matches in Hearthstone Copa America will be Best-of-Five, conquest mode. All players must present 4 decks and will have a chance to veto one of their opponent’s decks per series. Qualification duels, group stage and finals will be played with publicly open decks.

Where can I talk to official staff of #HSCopaAmerica?

If you have more doubts regarding Hearthstone Copa America, don’t hesitate to access the support channel in discord: https://discord.gg/8g9s2Ke . You can also send us an email to: LatAmEsports@Blizzard.com

What is the prize of #HSCopaAmerica?

Along with the honor of being the new champion and more than 190 HCT points at stake, Copa America will distribute USD$15,000 in prizes each season. More details are available on the Copa America 2018 official Ruleset (Available soon)

Can I play with an account that I don’t own?

No, as stablished on the official policies from Blizzard Entertainment, all the players must be legal owners of their Hearthstone account, for Copa America 2018 all matches will be played on the American server.